In BAA program, Danish and Japanese students took the class on global climate change and energy choice in August 7. The instructor is SWU Professor Masako Konishi who is working as expert director for WWF Japan, and also engaging in UN climate negotiation.

At first, we learned about the basics of climate change and the Paris agreement. According to the World Bank, around 1 billion people still live in extreme poverty and more than 800 million people do not have enough food to eat. Especially, the developing countries do not emit a lot of carbon dioxide. On the other hand, developed countries produce a lot of carbon dioxide because there are many emitting facilities. 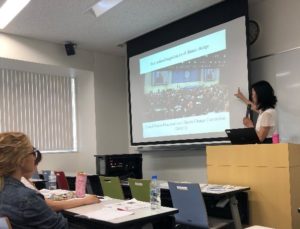 Based on the past emission, it is already proved that the temperature will be increasing by 4℃ or at least 2℃ in the future. This means no one can stop the global warming. To prevent this global problem, we need to cooperate with people all over the world. So, we do international negotiations to make international agreements like the Kyoto protocol and the Paris agreement. The Kyoto protocol, however, clearly divided the participating members into two parts, developed and developing countries because developing countries were exempted from setting their goals. But the Paris agreement applicable to all countries because the agreement asks every stakeholders to do their best.

Finally, we did the group discussion about what kind of energy we should chose for our future society. We analyzed pros and cons of renewable energies, nuclear, and fossil fuel. We learnt when you choose the best energy, you should think about environment, economic development, energy security and safety.

In this class, we avoid choosing nuclear energy. One classmate said that nuclear energy has the problem of long-term storage of radioactive waste. Other Danish classmate pointed out about the accident of Fukushima nuclear. We had productive discussion and realized we should think climate change problems for our future. The most important thing is to get to know about the climate change situation and make the best effort. So, this class was the first step for our future.